PoE, or Power over Ethernet, is a proven time-saving and money-saving technology that delivers both data and power safely over the same Ethernet cable for the local area networks (LANs). In the current market, if you take notice of Power over Ethernet switch types, you will find that there are PoE switches, PoE+ switches, and PoE++ switches. But how much do you know about these three PoE switch types? What are their distinctions? And how to make a proper selection among them?

What Is PoE and PoE Switch?
What is PoE? PoE technology was defined by the IEEE 802.3af standard in 2003. Under this standard, the PoE allows a PD (powered device) like VoIP phones to receive up to 12.95W PoE wattage, utilizing just two out of the available four twisted pairs in Ethernet cabling.

Then what is a PoE switch? PoE switch refers to an application of PoE technology. Functioning as a kind of PSE (power sourcing equipment), a PoE switch can supply power to PDs via Ethernet cables to realize network connectivity. Generally, an 802.3af switch supports max power consumption up to 15.4W per PoE port with a voltage range between 44V and 57V. And the voltage range of PDs, connected with the PoE switch, is from 37V to 57V.

What Is PoE+ and PoE+ Switch?
PoE+ technology (IEEE 802.3at standard) is an upgrade of PoE technology, which was published in 2009. PDs in the market tend to require more wattages, like wireless access points that require PoE wattage more than 12.95W to work normally. To solve that, here comes the PoE plus technology, which can support high power consumption.

What Is PoE++ and PoE++ Switch?
In the pursuit of adding more power to broader device applications, the IEEE 802.3 standard once again is required to upgrade its PoE+ technology to PoE++ (IEEE 802.3bt standard) in 2018. PoE++ can be classified into two types: Type 3 and Type 4. Type 3 enables two or all four twisted pairs in a copper cable to deliver power at a PD up to 51W. Type 4 is up to 71W at a PD over four twisted pairs in an Ethernet cable. By the way, Cisco’s proprietary technology UPoE (universal Power over Ethernet) works similarly to the PoE++ Type 3, which extends the IEEE PoE+ standard to double the power to a PD to 51 watts. In some cases, UPoE is also called as PoE++.

As an upgrade to Power over Ethernet switch and PoE plus switch, PoE++ switch can deliver up to 60W on each PoE port under the Type 3 and up to 100W under the Type 4.

PoE vs. PoE+ vs. PoE++ Switch: Which to Choose?
Based on the above mentioned introduction, a reference chart that summarizes detailed specifications among PoE vs PoE+ vs PoE++ is presented below, which may be helpful when choosing the PoE switch depends on different requirements. 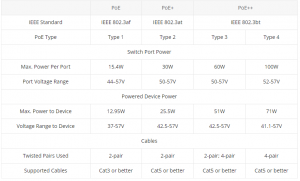 Note that the presented figures are just valuable in theory. In fact, PoE series switches often oversubscribe the total power capacity of a switch with more ports. That is because many devices will use less than maximum power. For instance, if you have a switch with all PoE++ Type 4 ports, it does not mean you will use all of them at maximum load 24×7. Consequently, you need to calculate the power requirements for all the powered devices that you plan to connect to switch and select corresponding patch cables for your PoE design.

Evidently, the major differences among PoE vs. PoE+ vs. PoE++ switches lie in their working mode and power supply, which reflect on their applications. An 802.3af switch is usually used to support devices that require the power delivery less than 15.4W, such as VoIP phones, sensors, meters, wireless access points with two antennas, and simple, static surveillance cameras that can’t pan, tilt or zoom. As for the PoE+ switch, it supports devices such as more complex surveillance cameras that pan, tilt, or zoom, as well as wireless access points with six antennas, and video IP phones. With a higher power wattage, the PoE++ Type 3 switch can support devices such as video conferencing system components and building management devices. And the PoE++ Type 3 switch can support devices such as laptops and TVs.

Assumed that your data center only requires low standard power levels, you may stick to PoE switches. However, if you’d like to build a more robust and high-performance network with multiple varied devices, plus, don’t want to bother to consider the port limitations, then picking PoE+ or PoE++ switches will be the right choice. When starting to build infrastructures of higher requirements or plan for upgrades, take a look at PoE+ or PoE++ technologies may be wiser. However, not everyone needs a full upgrade. If your current PoE solution is adequate and fits your demands, it might be reasonable to remain your existing PoE network design.

Conclusion
Due to growing power requirements, the Power over Ethernet technology has been evolving with the trend. Along with that, the PoE based switch has also upgraded from PoE network switch to PoE + switch, and PoE++ switch. This article sheds light on the differences between PoE vs. PoE+ vs. PoE++ switch as well as their applications. Hope this post will give you some inspiration on choosing a suitable PoE network switch.

Ubiquiti Most Popular and Recommended Devices 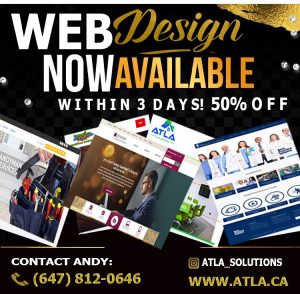